When you think of Serbia, you probably think of something in terms of Balkans, SFRJ, Tito, Novak Djokovic, Nikola Tesla, great festivals, excellent beer, rakija and a loooot of meat, then beautiful women, awesome parties and loads of fun with some pretty amazing, friendly and outgoing people…

Yeah, you are right. But there is one more thing you most certainly think of as well-the thing most Serbian people love to do is- to smoke! All the time, everywhere and nobody can stop them!

Fact is that Serbia ranks the number one place in smokers per capita. This makes it incredibly difficult for a non-smoker to find a venue to enjoy in, smoke-free. It is not easy for the planet either. Health professionals around the world now accept the fact that there is somewhat of a global tobacco epidemic and that there are some serious health consequences. It is estimated that the total number of tobacco users is 1.3 billions and is expected to rise to 1.7 billions by 2025.

In Serbia almost half of men and one third of women are active smokers, and among teenagers 16.3% girls and 12.5% boys by the age of 15 years smoke. 65.7% inhabitants of Serbia are Exposed to environmental tobacco smoke in their homes, and almost every child. At work places, 55.5% of employees are exposed to second hand smoke for more than 1 hour daily.

If you are a non-smoker, the restaurants, bars and  clubs can be the living Hell for you. It can be incredibly difficult for you to find a venue to enjoy in.  You know the feeling-of not having your entire wardrobe and bags, coats and hair smelling like someone emptied an ashtray on you. And you will often have to deal with smug and smirking glances after even just asking about a non-smoking area of the joint. Don’t let this surprise you. You need to be aware of the cultural differences that you will be faced with here.

There is a Joke about it: A foreign couple comes into a restaurant and asks the waiter: “Have you got a non-smoking table?”. The waiter answers them: “Sure, which table you don’t want to smoke on?”

The Signs & the Law

Most of the time you will find both signs below outside of a venue. This means that there is actually a non-smoking area inside, theoretically speaking. But  in fact, the guests simply don’t care at all about these signs. Don’t try to call your waiter and complain, he won’t give a shit about it. The only possibility which you have, is to change the venue and to hope, you will find a better/different one nearby. There are not a lot of them. At the end of this article, you will find a list included so you can know beforehand exactly what to expect and where.

Officially, a non-smoking law exists and the Serbian Government announced that it was getting ready to enforce it with more force and make it applicable anew, so the smoking would become forbidden in all the restaurants, bars and clubs. This was in the beginning of the Year 2016. In the meanwhile, has anything changed? Nothing!

If you are wondering what the Ministry of Health or at least the doctors and the medical staff of this country do against this “epidemic”, here some statistics about typical Serbian nurses: 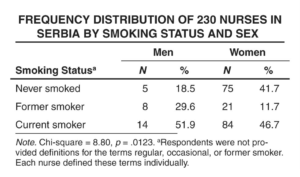 So, the answer? Nothing. Most of them in fact-smoke themselves! 🙂

You are free! There really is no other place in the world where you can feel more accepted and appreciated than here in this regard. Your passion will never again be interrupted by having to walk out and smoke, and this means you can stay, enjoy and party all night long!

Summer brings freedom for everyone

During the summer, situation for our poor non-smoker is much better. Belgrade has become world known by its open river boats, where you can party all night long under the stars and the night skies covered in various lights and moonlight.

There is nothing more beautiful than the sunrise in Belgrade you can greet while you are dancing on the river; with or without a cigarette in your hand.

Smoke or not smoke

So, be prepared to stand your grounds and not get insulted by this, for many, rude and preposterous attitude you will get.

Still, to avoid getting into this situation in the first place, like we mentioned earlier-on our website you can find the list of some non-smoking venues, as well as the list of the venues in which #smoking and #non-smoking-areas are properly segregated.

Business Development is his primary occupation. He was a founder of a bar in Belgrade which helped him understand the Serbian mentality better. He is an avid food, coffee and wine lover, a passionate hobby chef, loves Serbian girls and meat.